THE JUBILEE GOLF CLUB WAS FIRST ESTABLISHED IN 1935

From 1935 until 1962 Jubilee Golf Course had sand scrapes at McDonald’s property on the Yarrawonga road, 11 kilometres from Wangaratta (on the North West corner of Yarrawonga Road and Old School Road). It was a winter course used from March to October. Golf was becoming popular and people expected better facilities so the club decided to purchase their own property and move from McDonalds rented land to its current location some seven kilometres from Wangaratta on the Wangandary Road, where the beautiful Warby Range majestically towers over the Western side of the 18 hole golf course.

149 acres of land was purchased for 5330 pounds. Dick Moore proposed the idea and was supported by Dick Pendlebury and the idea was taken to a meeting. On the 12 April 1962 at that special meeting approval was given by the members to purchase the land. Ray Patrick proposed and it was seconded by John Nugent.

Dick Pendlebury already had a reputation for building golf courses and was a tradesman who built golf clubs with hickory shafts. Dick was asked to tender for the project and won the tender for 75 pounds. The 18 hole golf course began to take shape under his direction.

The course was officially opened, just over a year later, on the 27 April 1963 when Mac Holten drove the first ball down a fairway. But the course was rough with stumps and rocks and many thousands of hours have gone in to bring the course up to the very high standard we see today.

Mac Holten drives the first ball to officially declare the course open. Watching on is Bert Waldron and Edith Grieve.

Volunteers, then and today are the most valuable assets Jubilee has. The savings then and now is substantial in dollar terms. Volunteers did it for the love of the game and nothing has changed except some of the faces. Every Thursday volunteers spread out across the course and begin work. They worked hard at improving the course back then, and do the same today.

In 1963 the committee consisted of the following people:

SOME OF THE MAJOR DEVELOPMENTS AND EVENTS TO DATE ARE AS FOLLOWS:

A watering system was established costing $5,200. Greens were now complete.

The greens were officially opened by VGA President Mr Alec Brake on the 9 July. The dam needed enlargement.

Drought. Two trucks, one supplied by G Barry and the other purchased by the club, carted around one million gallons of water from the Ovens River to keep the greens alive. A verandah was added to the clubhouse.

Terry Brew was employed as curator and played a major role in drainage, watering systems and course improvements.

The water pipeline was installed from the river at a cost of $25,000. This was another drought year.

Tragedy struck and the clubhouse burnt down. A tent at the first tee was used as a clubhouse until a temporary clubhouse was built by the members at a cost of, $7,500. It’s now part of today’s clubhouse and is where the kitchen, bar and pool room exist in the current building.

Old Jubilee Club House adjoined to the old farmhouse. A verandah was built on later then closed in. This clubhouse was destroyed by fire on 27 January 1974.

The building of the present clubhouse begins.

Alan Belcher and Alf Stevenson point to the start of the landslide that crossed the 11th fairway, passed through where the Ray Hill Pavilion now stands and travelled down the 10th fairway almost to the present car park.

Major drainage, clubhouse development and an extension of the watering system occurred at a cost of $110,000. Part grant. Part in kind with Club members physically pitching in and a $50,000 loan.

The new clubhouse was officially opened by the VGA and AGU President, Mr Cec Evans. The clubhouse was designed by architect and club member, Ian Rooney.

On the 14 August a liquor license was granted.

Landscaping around the clubhouse, a putting green and a car park extension.

The clubhouse verandah was added.

Club Incorporation occurred. The dam was again enlarged to cater for the course needs.

Automatic watering systems to tees and greens. Over 20 years the membership had doubled to 400.

A reunion celebrating 25 years on the current site.

Over the past thirty years Jubilee has continued to go from strength to strength building on its assets through:

Jubilee Golf Club wishes to thank Dick Pendlebury and his family for information in relation to the clubs history. 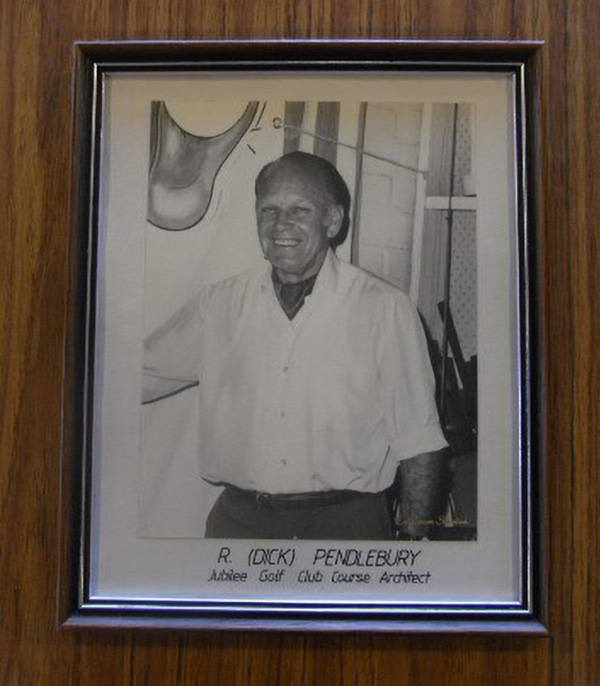 In 1926 he was accepted as qualified for membership of the British PGA Assistants course, beginning teaching, competition work and course planning. He was now playing off a handicap of 4.

In 1927 he emigrated to Australia, working on farms near Balldale and Corowa. In 1931 the Depression saw him leave farming and working part time at the Corowa Golf Club.

After a short stint working in Sydney he returned to Corowa and in 1938 married Lillian.

1946, Post War, decided to move back to the country – Hamilton, as the course professional. Here he established a course record with a 65 – it took Norman Von Nida to beat it with a 64.

In 1953, to the amazement of trade contacts, the family considered relocation to Wangaratta where “the course and club house were actually of a very low standard, situated on Common Land.  The so called pro room was really poor”. This was at the now HP Barr Reserve area.

He set up a joint business for golf repairs, teaching and course design with Frank Towner and Ian Rooney in a tin shed at the rear of Moloney’s butchers in Reid Street.

In 1958 he opened his own premises in Templeton Street near the Sydney Hotel – known for the tennis racquet on the roof.

A phone call in 1962 from Dick Moore asking “how many acres are necessary for a Golf Course” started the new course at Wangandary. Dick designed the layout and put his whole being, blood, sweat and tears (along with others) into this project.  Jubilee Golf Course was opened in 1963.

In 1964 he conducted an extensive study tour of golf courses in the UK and was able to play on many famous courses and revisited St Anne’s.

He retired in 1986 but continued limited teaching and club repairs from a home workshop. He continued writing poetry/drawing cartoons and commenced oil paintings. He collected and restored numerous hickory shafted golf clubs.

“There is no more satisfaction of a permanent nature in Course Design. No other project is more visible, lasting and gratifying than Jubilee. I think of those who have passed on, they would have been enthralled. To describe good layouts is ‘Beauty with a Challenge’. This I feel applies to Jubilee in no small way”.

An honour board has been donated by the Pendlebury family for both Men and Lady’s winner of the Medal of Medals.

My memory is about my grandmother, Annie Hoysted. A family tragedy brought Nana into golf. In 1933, aged 36, she was widowed, and sadly three years later, her seven-year-old son George died. Her friends at the Anglican Church really helped her and they introduced her to golf at Jubilee. This was about 1937. Rick and Elsie Burridge were some of the golfers that brought her to golf each week. She played into her 80’s. Her greatest achievement was at Benalla with Joan Lack and Grace Maroney when they won the Bowl. Robyn Grealy

Since my first handicap card in 1976 I have had many wonderful years playing golf at Jubilee. This has given me much joy and pleasure and kept me fit and healthy.  Jubilee course is tops with many improvements done over those years, lovely fairways, challenging greens and very friendly people. My first years were helped by encouragement from older members in Hilda Karnatz, Kath Burridge, and Barb Sloan and I was made welcome by all members. I have so many happy memories with the club and I wish them all the best for the future. Alma Sargent.

To enable us to get ‘competition golf’ going as soon as possible, the heavily timbered areas of the course were just dozed to one side or the other and so the ‘fairways’ were formed. A local rule prevailed allowing a ball that entered this debris area was not lost; a ball to be dropped at point of entry – no penalty. Playing down the 15th on this occasion a fellow competitor, a visitor, had disappeared into the scrub to chance finding his ball. After a while I told him don’t worry, just drop another ball out here, there is no penalty. I am not worried about the ball mate, was his reply. I can’t find my bloody clubs! We certainly had some difficult situations in our early days before what is now as a wonderful golf course. Rod McKenzie.

The tees needed to be reformed and the trees on the back 9 required thinning out. David Ross had an old bulldozer on his Everton property. We talked him into loaning it to the golf club, provided we could get it started and transport it to the club. I’m not sure who provided the low loader, but Greens Director Vern Dalton, organised it, plus a crowbar, cans of Aerostart and a new set of batteries.  The batteries were installed, the crowbar was used to turn the engine over making sure it was not rusted up, then plenty of Aerostart and hit the starter.  After what seemed a long time it burst into life, belching black smoke. It was loaded and shifted to Jubilee where it was used for a couple of years. Conclusion: a good example of how we build the course. John Guilfoyle.

I would like to say that I think I would be the luckiest member here to be given the health and fortune to have been able to play golf and make so many great friends. Right from the beginning in 1963 till the present time, the memories I treasure are of members, both men and women from all walks of life that have worked so hard over the years turning the rough old spewy bush track we had at the beginning into the beautiful course we have here today. This has been achieved with the great club spirit that we have here and is still as strong today. It is something that has seen Jubilee win through some tough times such as losing our greens in a very dry year. Then we copped a landslide that spread rocks and boulders and everything that was in its way across the 10th fairway, almost down to the lady’s tee; our clubhouse was broken into often and goods stolen; and then our Club House was burnt to the ground. The mood was one of despair for a while, but the members came back with nearly all saying we are not going to let this beat us, we will rebuild. A great effort by John Guilfoyle, Bob Morrison, backed by club president Alan Belcher and committee, gained a grant from the sports and recreation ministry of $30,000. We had to match this which we did with our voluntary labour. With that grant we built the present club house, put in a water line around the course, pop ups around our greens and 4km of drainage. This was done with the greatest voluntary effort. Ralph Nalder.

Anne McLeod (nee Goldsmith) was a young teenager as the Jubilee Golf Course as we know it today, started to take shape. The front nine was the farm and the back nine was virgin bush – much like the bush behind the 12th and 15th tees today. The 18th hole had been the house paddock where the house cows roamed. The dam was much smaller then. The 5th fairway was an orchard. As the back nine was being constructed the members were able to play golf on shortened fairways which helped to keep their interest up. For instance on the 11th a temporary sand scrape was level with ‘that grass tree’. The 12th sand scape was where the cottage is now.